With the vision of ‘Building India through enterprise’, Jagriti Yatra is a 15-day train journey covering 8000 kilometres across the length and breadth of India. Every year, hundreds of India's highly motivated youth, especially those from small towns and villages, embark on this journey. The 2019 batch of Jagriti Yatra was gathered at the Entrepreneur Development Institute at Ahmedabad for its valedictory function. The forum witnessed conversations on entrepreneurship with three former Jagriti Yatris, who have built their own successful agro-enterprises- Selvakumar of VilFresh, Ketan of Krishi Naturals, Archana Stalin of MyHarvest Farms.

This year’s event also saw the release of the book- Farming Futures: Emerging Social Enterprises in India. Covering 15 case-studies spanning a wide range of agri-sector issues including innovations in providing more efficient and non-exploitative linkages to markets and consumers. 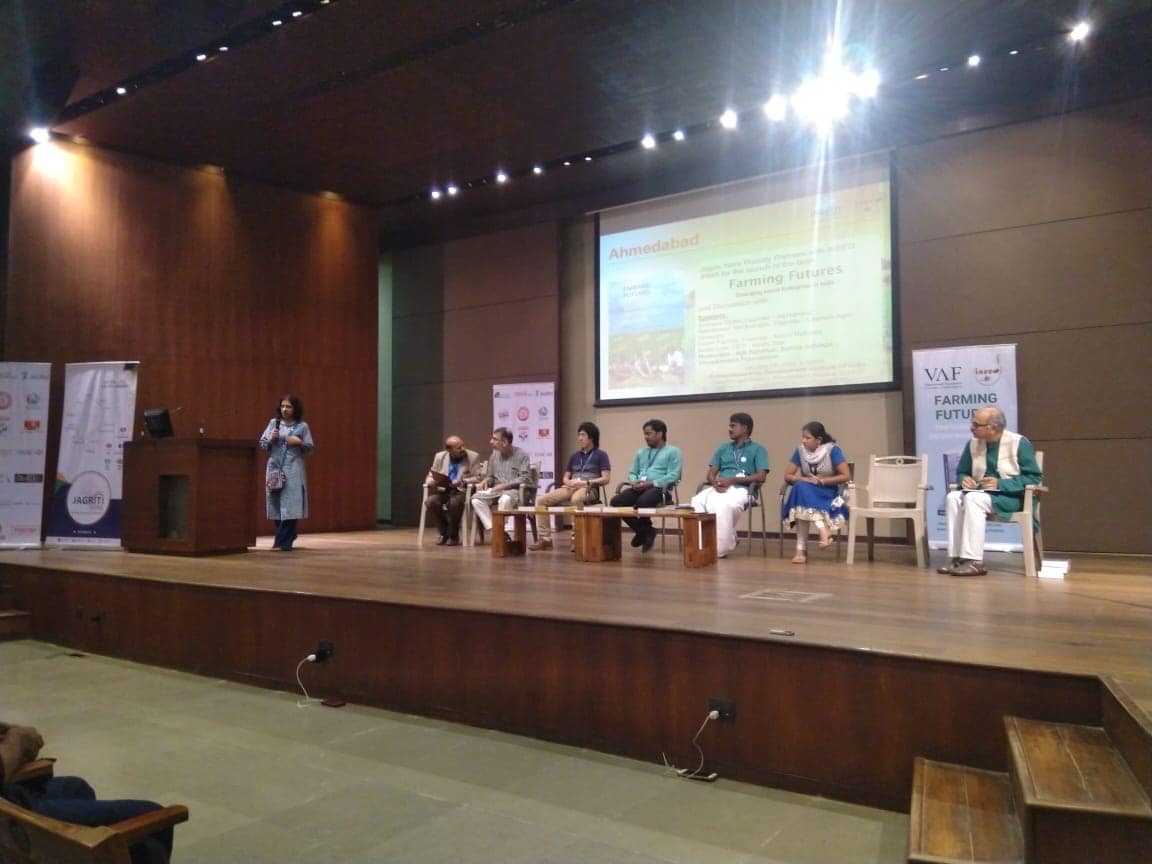 Dr. Vanitha Viswanath, speaking to the audience, remarked how despite everything, ‘India still runs’ and Indians always find a way to keep it going, likewise urging the Yatris to keep up the momentum.

Dr. Dinesh Awasthi, former director of EDII, spoke on social entrepreneurship as businesses who put the planet and people first, and then profits. He urged the aspiring Yatri entrepreneurs to use the book as a catalyst in carrying their ideas forward, using strategies from case-studies.

Dr. Ajit Kanitkar, co-editor of the book, spoke on the book’s case-studies which addressed some deficit in agriculture, creating value-chain, ware-housing etc. He then moderated an interactive panel discussion with the Yatri-preneurs along with his fellow authors- Prof. Shambu Prasad, & Dr. Vanitha Viswanath, Board member of Jagriti Yatra, Dr. Dinesh Awasthi-Former Director-EDII, joined by Bryan Lee, CEO Krishi Star.

The conversations of the evening centered on the entrepreneurial journey, especially from the purview of first-generation entrepreneurs. Some of the key insights from the panel discussion are..

Bryan likened the entrepreneurial journey to a marathon and not a sprint.

Selvakumar, who quit his I.T job to start his own venture, recounted how he funded his venture in the initial years by pledging his wife’s jewellery, his car etc. During this time, he never gave-up since he viewed the business as his baby, supporting it every way he could, just like a parent. Over time,he succeeded in bagging grants through Govt Schemes, such as Stand-Up India Loan, CGTMSE.

Archana, an engineer, and her husband both quit their jobs to start their own farm. She built trust amongst her urban customers by equating the concept of a ‘Family Farmer’, who like a family doctor, caters to the need of your family, grows for your family, whose farms you can personally visit!

Ketan, an alumnus of TISS, remarked that in such platforms, entrepreneurs are considered ‘cool’ and celebrated, however at ground-level, they slog it out playing many roles- founders, trainers, laborers, managers.

Vision for growth, Horizontal vs Vertical Scaling Funders/Venture Capitalists majorly focus on horizontal scaling i.e. approaching multiple geographic markets and rapid expansion of customer/subscriber base. But as founders of socially-responsible ventures, they aimed for sustainable growth and vertical impact- how deeply they are able to support the community and provide an assured income to partner farmers.

Ketan shared that the growth of social ventures would not match the scale-up of an e-commerce start-up. His focus was not just increasing the number of farmers but also to ensure a minimum assured income of Rs.18,000-20,000. He aimed to expand to Gujarat and Maharashtra in the next 5 years retailing to all major metros through e-commerce.

Bryan shared that pressure for scaling often came externally, from investors who worry about market-size, but very few asked what is the depth of his impact or about profitability. The onus is on the founders to take the call in such situations.

Archana aims for steady organic growth, as chasing only numbers may lead to quality compromises. In next 2 years, her goal is to add one more city(in addition to Chennai) after which she feels her brand, process, model could be replicated anywhere. Selvakumar intends to replicate his model in Tier 2&3 cities in T.N,A.P, Karnataka,Maharashtra.

Business Plans vs Reality Agility and being dynamic in making changes in business plans through various stages of operations was necessary. Selvakumar remarked that every Excel plan was rendered useless after 6 months of getting into operations!

On Jagriti Yatra Programs such as Jagriti Yatra, whose network of participants keeps growing with every year’s batch, helped in showcasing entrepreneurial stories. All emphasized on the importance of networking which helped in securing funding. Ketan spoke on the power of weak ties, and how the Yatra helped him explore different business models at ground-level. Archana shared that the entrepreneurs she encountered in the Yatra, inspired her to start a social enterprise, becoming a job creator.

Selvakumar went from being a Trader to starting his own venture. Jagriti Yatra also gave him his first recognition, an award for sustainable business. The idea for his venture was born from an ‘Eureka! Moment’ during the Yatra, when he had photographed a shop in a rural hamlet selling Lays chips, samosas & laddoos which left him pondering that buying Lays sent the sales proceeds to another country, while purchasing local snacks would keep money within the local community.

Prof. Shambu Prasad, highlighted the increasing interest from urban India and non-farming backgrounds to get into agriculture. He also spoke on the need for incubation centres, like ISEED which mentors early stage enterprises, helps to build capacities and provides networking opportunities to interact with fellow entrepreneurs in a cohort. He urged incubators to actively engage and understand the context of the entrepreneurs, especially during their initial struggling period of operation.

The discussion between academicians, entrepreneurs left us all better informed about entrepreneurship and agro-businesses, sowing the seeds of entrepreneurship in young Yatris. The event came to an end with the energetic rendition of Jagriti anthem Yaaron Chalo!

This blog is written by Ms. Vandana Ravi. She is currently working with ISEED as Research Associate for documentation. She has worked in FMCG sector after pursuing her MBA. She is keen to explore the social entrepreneurship space.

Social Business: How Social is Social?